The fruit-picking season has come, and as the recent drop in temperatures shows, it is most likely gone. My family and I have managed to go apple-picking at least once every summer for the last 3 years. It has always been a peculiar experience, where we had to grind our way through trafficky roads to and from the apple orchard only to end up paying twice as much for apples than we would have at a local grocery store.  But, the time at the orchard has always been a blast and made the whole thing worthwhile. This year, being the risk-takers that we are, we did something different and went to an orchard that grew peaches and nectarines in addition to apples. A bucket full of peaches and nectarines is great, but then the question comes up, what do we do with them? Even after giving away a bunch to family, there were still more of them than we could eat before they would rot.

The solution I came up with was to make a kompot. What, you may ask, is a kompot?

The word “kompot” comes from the French “compote”, meaning a mixture. According to Wikipedia, it started out in France during Renaissance times and then spread through Eastern and Central Europe. In essence, kompot is fruit stewed with sugar. It can be made either thick and syrupy (primarily meant for eating the fruit as dessert), or light and watery (meant for drinking).  This dish became a staple during the Soviet times because it’s a convenient way to preserve fruit for the winter, which was a must if you wanted to have any fruit during winter. This dish is very versatile. It can be made with any type of fruit or berries, and with varying amounts of sugar, depending on preference. The recipe below comes out light, refreshing when chilled, and so good that it may be addictive. I made it with peaches, but apples, plums, or pretty much any other fruits can be used. For apples, use the same number of apples as peaches here. For plums, the number of plums should be about 1.5 times the number of peaches (since plums are smaller).

In this recipe, a small twist is added to kompot by throwing in teabags. Hence, peach-flavored iced tea! 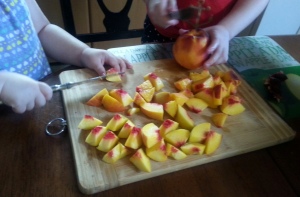 Cutting the peaches. Little hands with the knives are our daughters’. Butter knives, of course. 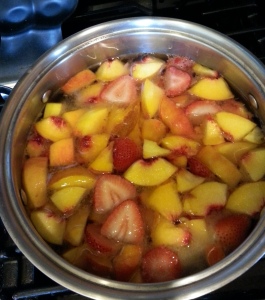 Mixture close to boiling. As you can see, I added a few strawberries together with the peaches.

Bystro Blog is back: Oatmeal and Banana Pancakes

Posted on September 8, 2015 by yvoloshin

Bystro Blog is back! Its been almost five months since my last post and anyone may be excused for thinking that this blog is dead. But no, I was just taking a long break to change careers. I have been in the process of transitioning from chemical engineering to web development by studying at a “bootcamp” called The Firehose Project. It was a great experience and I learned a ton about building websites. The work has been pretty intense and used up all of my time that’s not taken up by the family. I graduated about three weeks ago and since then have been busy with online courses and personal projects. One of these projects is a recipe sharing site, so more on that in a later post. Now, the only thing that’s left to do is to find a job.

Warning: shameless self-promotion ahead! If you know of anyone looking for a web developer specializing in Ruby on Rails, please let me know. I would really appreciate it.

In the meantime, I’d like to share my favorite pancake recipe. These are easier and faster to make than any other “from-scratch” pancake recipe that I’ve tried. The recipe was a random find on a blog called Broke and Bougie. I will not post the detailed recipe because it can be seen here. It involves mixing oatmeal, eggs, and a banana with a food processor until the mixture turns into a batter and frying it. The pancakes come out fluffy and with a light banana flavor. A small change I made to the recipe was that I used three whole eggs instead of four egg whites. Also, the vanilla extract seemed to be lost among the other ingredients and made no noticeable difference. 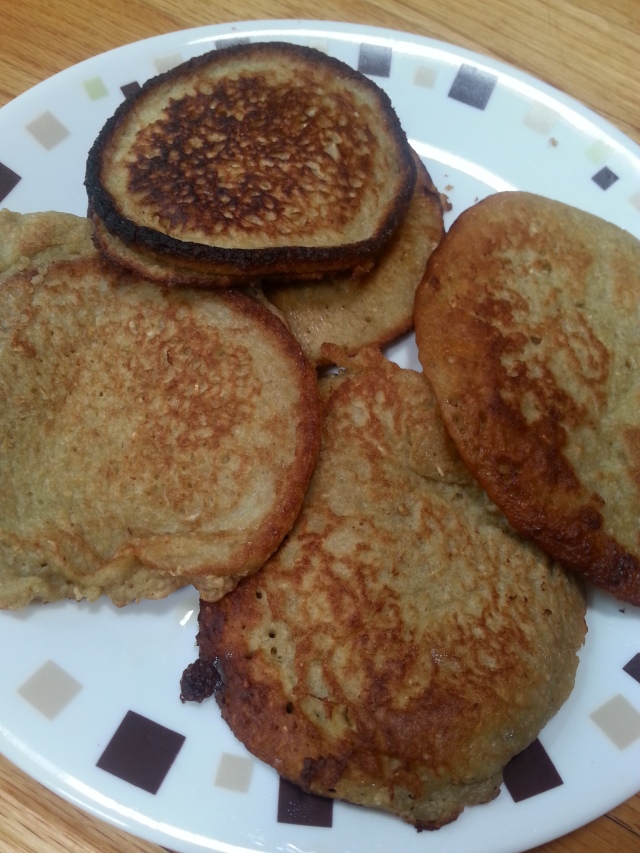 Here’s something you don’t see every day: a beetroot soup that’s not borsch!

This wonderful root vegetable is one of the main culprits of perhaps the most overused word in modern foodie vocabulary: ‘earthy’. I’ve been looking for a definition of this term in most modern dictionaries but none exists. I think we can safely say that the word is associated, in food terms, with any vegetable that is grown in the soil. Potatoes, sweet potatoes, asparagus, carrots; they all have that ‘earthy’ quality.

There’s no getting away from it: beets are the epitome of ‘earthiness’, however you choose to define it. Not only that, there’s also an inherent sweetness of this bulbous and violently purple vegetable. Nutritionally, they are full of anti-oxidants known to reduce to levels of free radicals in the blood, with good levels of magnesium, sodium, potassium and vitamin C.

For cooking, beetroot lends itself to so many dishes: beetroot soup (or ‘borscht’ in Eastern Europe), spiced Indian dishes, risottos…

This has become one of my favorite dessert recipes. It is a banana-flavored sugar-free fat-free and dairy-free ice cream. (Its not banana-free and it’s not free. You do have to buy the bananas.) The amazing thing is that it really does consist of nothing but bananas. The recipe can be found here on food52.com. I followed the recipe exactly as written.

In the next two posts I’ll talk about two recipes that are not particularly Russian. The reason I decided to include them is that they go very well with the first word in this blog’s title, “bystro”, which is the Russian word for “quickly”. The fish sticks recipe is a version of a fried fish recipe that I’ve loved since childhood. And these days, it’s always a hit with our kids. No doubt, this is true for a lot of people, since this recipe is pretty common. The only difference between these fish sticks and the fried fish I’ve known since childhood is that the fish sticks are cut prior to cooking in the shape of, well, sticks.

All ingredients ready to go 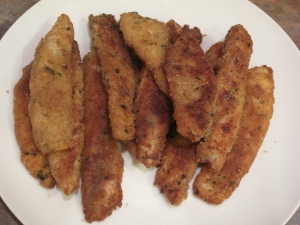 Here is a recipe from The Art of Russian Cuisine by Anne Volokh that became one of my favorite meat dishes. We can call it the meat version of the Fish in Tomato Sauce posted earler. The combination of smooth sauce, earthy mushrooms, and tender browned beef is hard to resist. The Russian name for it is “podzharka”, which is an old word meaning “something fried”. From this, we can guess that the inventor of this recipe considered browning the meat an essential step that gave the meat its flavor. The preparation involves two frying pans, a smaller one and a larger one (preferably deep). END_OF_DOCUMENT_TOKEN_TO_BE_REPLACED

Those who celebrate Passover know that, when it comes to store-bought dessert, this holiday is a dessert desert. With the notable exception of macaroons, good kosher-for-Passover desserts are few and far-in-between in grocery stores. I make desserts very rarely, only on special occasions, and Passover is one of those. It so happened that last weekend my mother-in-law came over and offered to show me how to make an apple pie out of matzah. This was an offer I couldn’t refuse! The result turned out great. It was delicious soon after baking, after it had time to cool down. It improved further after chilling overnight in the fridge. Here’s the recipe. END_OF_DOCUMENT_TOKEN_TO_BE_REPLACED 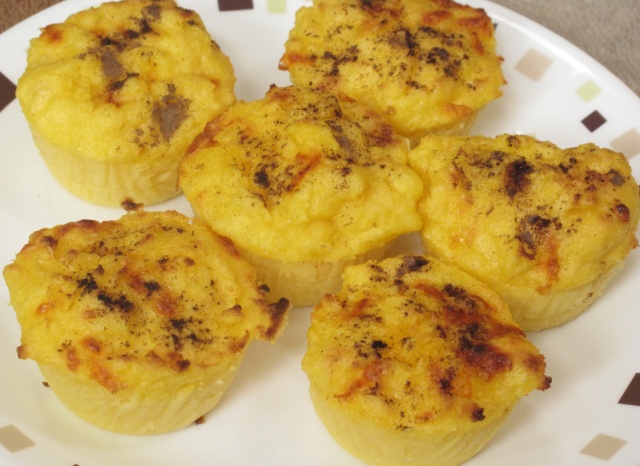 This is a muffin recipe that I bet you’ve never seen before. It is based on a type of polenta called “mamaliga”, which a corn mush that is very popular in Romania and Moldova. In fact, mamaliga is considered to be the national dish of Romania and Moldova.  Mamaliga is very similar to the Italian polenta. The main difference between the two is that polenta is soft and has the texture of oatmeal. Mamaliga, on the other hand, is firm and has the texture of bread. Indeed, it makes a great gluten-free and wheat-free substitute for bread. The firmness of mamaliga is what makes it possible for us to make muffins out of it. A quick online search showed only one recipe for mamaliga muffins on a blog called Gourmandelle, which exactly one more than I expected. It looks very appetizing, but a bit more time-consuming than I prefer. Here is a simple recipe for mamaliga muffins that I made for breakfast a few weeks ago. They were delicious, filling, and a big hit with the family. The last photo shows how cheesy they are on the inside.

END_OF_DOCUMENT_TOKEN_TO_BE_REPLACED

Life, and stomach flu, has been getting in the way of blogging for the last two weeks, and I am finally back. This post is a dish that is very similar to the previous recipe, Fish in Tomato Sauce. The two dishes look somewhat similar, each one is a fish cooked in a red sauce, but the flavors are very different. The Fish in Tomato Sauce is smooth and creamy, while the Moldovan Fish is more bright and tangy. Each is appetizing in its own way. The Moldovan Fish recipe comes from the country of Moldova, a former part of the Soviet Union. It has been taken from Please to the Table by Anya Von Bremzen and slightly simplified.

END_OF_DOCUMENT_TOKEN_TO_BE_REPLACED

This is a simplified version of my grandmother’s Fish in Tomato Sauce. My grandmother is an expert cook who can whip up something absolutely delicious in minutes without ever looking at a recipe, and this fish is one of my favorites among her dishes. It does not taste exactly the way it does when she makes it, which I would never hope for, but it comes somewhat close. The biggest modification of her recipe is that I added bell peppers to the vegetable marinade, while she only uses carrots and onions. Another difference is that she, like most grandmothers, measures out ingredients by eye and by taste, adding a pinch of this and a handful of that until the dish tastes right. I find this remarkable because her dishes always taste very consistent. But of course, “a pinch and a handful” is not something that will work in a written recipe, and so I had to estimate the amounts of ingredients. I think it worked out well enough, but you be the judge.

A great way to serve this is with a side dish that absorbs the sauce well, such as mashed potatoes or rice. We had it with just a salad and used bread to soak up the sauce.